You are here: Home / High jump blog / Do you jump over the bar correctly in high jump?

One of the common problems people experience when doing the high jump is that they don’t maximise their centre of gravity over the bar. The second major error that they tend to make is that they travel along the bar and end up landing on the bar, when they could have easily cleared the height.

It is important that you address these issues as quickly as possible because it will impact your performance. There is no point having a jumping ability of 2.10m if you can only officially clear 1.90m. So sort out this issue before it starts impacting your competition performances.

I will address the two issues below.

Not maximising your centre of gravity over the bar.

It’s important that your maximum height is over the bar. Many high jumpers end up landing on the bar because their run-up and take-off position are incorrect. It also leads to other issues such as too much flight time along the bar.

Have someone watch you or take a video to see if you are still going up or if you are going down over the bar. If so, make the necessary adjustments until your body is positioned over the bar during the jump.

Travelling along the bar.

This was a major problem that I had as a high jumper in my teens. Despite clearing heights by massive amounts, I would often travel from the take off position along the bar (1 to 2 metres in length) and then knock the bar off with my back, legs or gluten. It was frustrating because many of the other athletes would always come up to me and say that I was over it by a large margin. But in the end, I had to settle for what I had cleared and nothing else.

You need to train your body to go over the bar quickly at the point where your body’s centre of gravity is at its highest. This will probably mean you will need to adjust your take-off position and the angle of your approach.

It could be that your take-off foot is coming along the bar which is causing your body to take off like a long jump. It could also be the way that you are running off the ground. (If you also do long or triple jump, this could be a contributing factor).

Additionally, if you are jumping too close or too far out from the bar, your performance will also be impacted as you will spend more flight time across the bar rather than quickly going up vertically.

What can you do to solve this issue?

If you have a coach or someone that can watch you, then ask them if they can see whether or not you are jumping too close or too far out. Ask them to look at your foot placement and position to the bar, as well as if you are going over the bar quickly by landing opposite from where you took-off or are you landing on the opposing side of the mat?

If you don’t have a person that can help you, use a video camera on your smartphone to record a video of yourself doing the jump. Look out for the factors that have been mentioned above. If you notice any issues, you will need to make adjustments to your run-up, approach and take-off to ensure that you stop travelling along the bar.

Do you have any thoughts?

Leave your comments in the section below.

Want to improve your high jump? 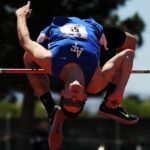 Sign up to our newsletter and learn how to become a better high jumper in the next 90 days!

Success! Now check your email to confirm your subscription.

Learn how to improve your high jump!

Improve your high jump with the following.